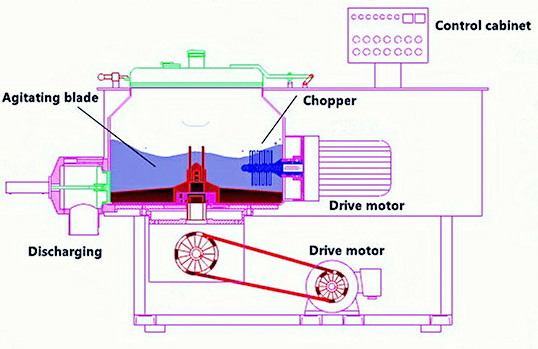 high shear mixer granulator consists of a vertical mixing barrel, bottom placed agitating impeller and side installed choppers. When powders or slurry materials are fed into the mixing barrel, the specially designed rotating impeller pushes the material onto the inner barrel wall. Under the effect of centrifugal force, the material moves up alongside the barrel wall to form a swirl flow. At the same time, the side installed high-speed chopper completely shear and chop the materials to get uniform mixing.

high shear mixer granulator can carry out even mixing of powders or slurry materials with different proportion, so that the mixed materials can reach their best effectiveness. Also it has been used for wet granulation process.

High Shear, Rapid Mixer Granulator is developed for mixing of ingredients as well as wet granulation required for tablet/ capsule manufacturing process. This is achieved by reduced processing time, more homogeneous mixing, and uniformity of granule size and above all maintaining improved hygiene compliant to cGMP norms.

The High Shear Mixer Granulator performs dry mixing & wet granulating by basic design of the special arm of the mixing impeller and sequences of the mixing process in the cylindrical mixing drum with rounded connection to the base plate, achieve another special effect. The mixing process runs without varying pressure zone in the volume of mixing product.